You are here: Home / About / Leadership / Jose Felix Diaz 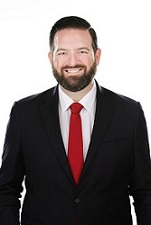 As an attorney, advisor, and four-term elected official, Jose Felix has consistently been recognized as one of the rising stars in government affairs over the past decade.  In 2010, Jose was elected to the Florida House of Representatives, where he served for seven years.  Jose ascended quickly to the leadership ranks of the legislature, where he chaired the Energy & Utilities, Regulatory Affairs, and Commerce committees.  Known for his fundraising prowess and sharp political instincts, Jose was recruited to serve on the Republican State Leadership Committee’s Future Majority Project Board, to help recruit and retain minority candidates throughout the United States.

During his legislative tenure, Jose was recognized by the American Conservative Union as one of the top ten young leaders in the United States and elected as chair of the Miami-Dade Legislative Delegation, where he led his colleagues during a period of sustained and successful bipartisanship.  A Columbia Law School graduate, Jose has significant international, federal, state, and local government affairs experience and legal acumen.  Early in his law career, Jose gained a reputation for being a tenacious advocate for clients in contract procurement, public private partnerships, complex legal, and land use and zoning matters.

Jose has been recognized by Miami-Dade County and the City of Miami for his national and statewide accomplishments. During the 2016 Presidential Campaign, he was one of four elected officials nationwide to be appointed to President Trump’s National Hispanic Advisory Council.  Jose has served on the Board of Directors of the University of Miami’s Alumni Association, CHARLEE Homes for Children, the Children’s Trust of Miami-Dade, Our Kids of Miami-Dade and Monroe, the Cuban-American Bar Association, and the Zoo Miami Foundation.  He currently serves as chair of the Legislative Committee of the Florida Constitution Revision Commission.  Jose resides in Miami with his wife and two sons.