You are here: Home / Publications / The Parks Foundation Has Launched Parks Passport

The world’s greatest park systems have conservancies and foundations to help sustain them now and for the future. The National Park Service receives support from the National Park Foundation, and New York’s Central Park is supported by the Central Park Conservancy. In that same way, the Parks Foundation of Miami-Dade works to raise funds and be a conduit of support to help maintain South Florida’s largest, most historic park system: Miami-Dade Parks, Recreation and Open Spaces Department.

Miami-Dade County Parks, Recreation and Open Spaces is the nation’s third-largest park system, proud of its uniquely rich profusion of 270 parks and 13,573 acres of land, beaches, trails, golf courses, and attractions like Zoo Miami and the Deering Estate. Not surprisingly though, basic government funding is inadequate to maintain, expand and sustain such a vast park system in one of the nation’s largest and ever-growing metropolitan areas.

The Parks Foundation of Miami-Dade is a 501 (c)3, non-profit organization established to support Miami-Dade Parks. The function of the organization is to ensure the present and future operation of these beautiful parks and facilities continues, and to provide quality recreational programs for every segment of the community.

The Foundation works with groups to adopt-a-park through volunteer and service projects. It also collaborates with organizations, donors and partners to build landmark parks and facilities, and to provide programs for children, seniors, people with disabilities, and at-risk communities.  Donations to the Parks Foundation have helped thousands of children learn-to-swim and hundreds more attend summer camp and afterschool programs.

The easiest way to get involved is by becoming a member.

The Foundation has launched a membership program called Parks Passport. This program offers new prices and appealing benefits, such as 25-percent-off admission to attractions including Zoo Miami, the Deering Estate and Miami EcoAdventures™.

Whichever way you choose to become involved, whether as a member, an advocate or a volunteer, what you do now will impact parks for future generations.  Let’s work together to make sure that parks are here to stay in this community.  The following are just some of the ways parks make a difference in communities:

For more information on the Parks Foundation of Miami-Dade and how you can get involved, visit www.liveaparklife.org. 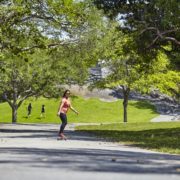 The Value of Parks

The Value of Parks
Scroll to top